Kelowna Visual and Performing Arts Centre Society (KVPACS) is a non-profit society managing the Rotary Centre for the Arts. We are governed by a volunteer board of directors.

Thank you to our countless volunteers and supporters.

The Rotary Centre for the Arts exists thanks to those who served on committees and boards, and supported feasibility studies and fundraisers over the past years. 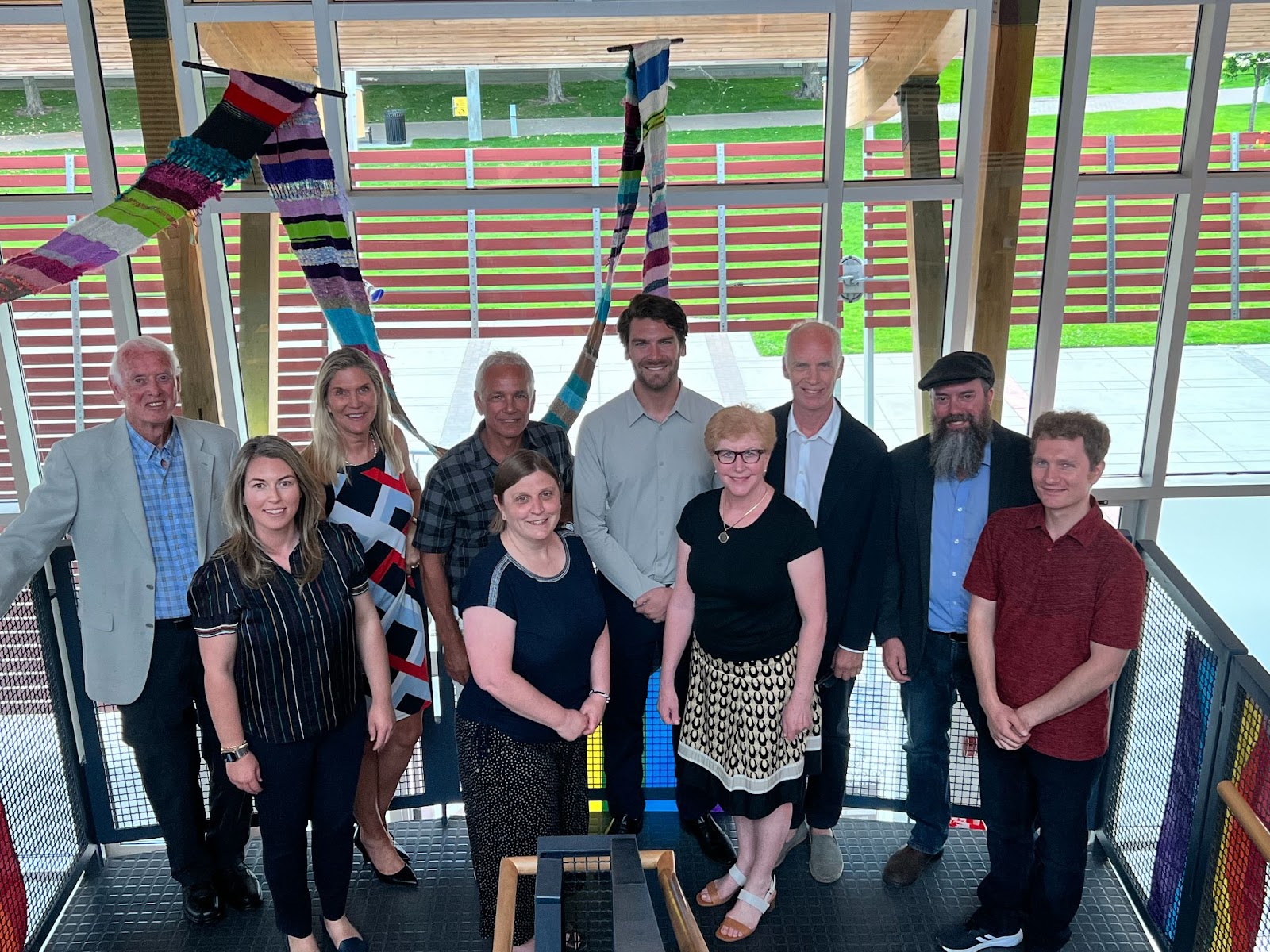 The meeting will be in person in the Rotary Centre for the Arts Boardroom, 2nd floor. Contact [email protected] for meeting details.

Voting is Open to all members of the Rotary Centre for the Arts in good standing. Annual memberships are $20. Register for your membership here. 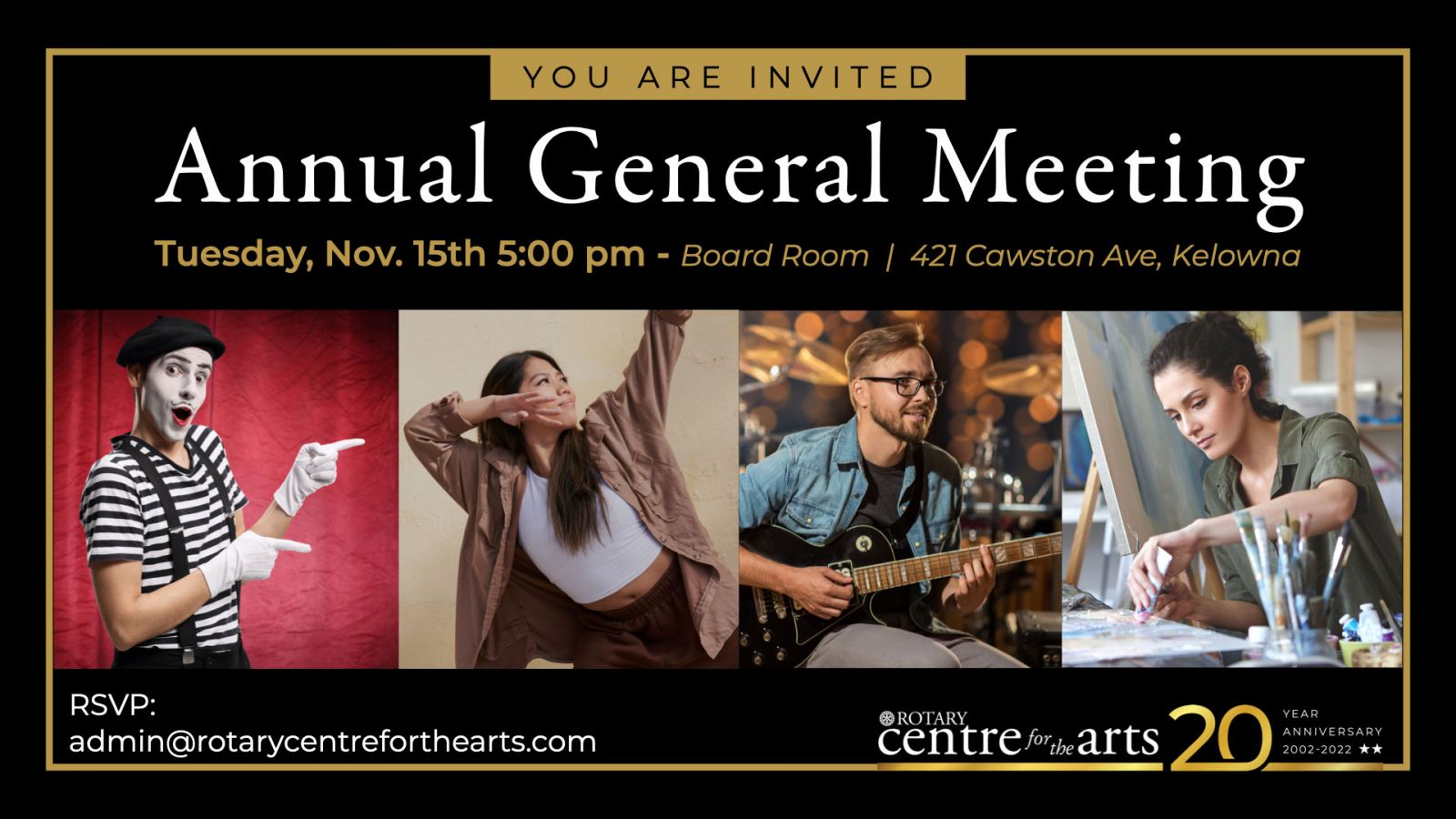 Jonathan Arkle (BA, JD) practices as a lawyer with Doak Shirreff Lawyers LLP, a well-established law firm and long-time presence in Kelowna.  He is the fourth generation of an Okanagan based family and is actively involved in the community both within and outside of the legal sphere, often found hosting seminars within the community and speaking on a variety of legal topics.  In his free time Jonathan enjoys training for, and racing in, triathlons in the summer and is an avid skier in the winter.  He is passionate about fostering the continued growth of Kelowna’s arts and culture.

Manik joined the Board as a Director in 2018 and sits on the Strategic Steering and Nomination Committee. He is a seasoned entrepreneur with a mixed portfolio of businesses and commercial real estate holdings. He is a strong believer of continuous improvement as such recently completed his Master's Degree in Management from UBC Okanagan. Manik is also one of the honourees of Top 40 under 40 award for 2020 and has also been featured on the cover page for Convenience Store News magazine. He is actively involved in our community and is currently also serving as a director on the board of KGH Foundation.

In his spare time you can find him with his wife and daughter enjoying the picturesque Okanagan.

Anne DeWolfe is a marketing instructor and has taught at the University of Saskatchewan, Langara College, and Okanagan College. She has 15 years of industry experience at the Canadian National Railway in Toronto and 15 years at UBC in Vancouver, in various roles.  Anne is always delighted at how digital marketing is transforming the marketplace for consumers and organizations.  Anne has an MBA from Concordia University in Montreal and is a graduate of Mount Allison University in New Brunswick. She credits Mount Allison for her keen interest in the visual and performing arts. She loves spending time wandering around art galleries, museums and attending the opera.  Anne is a past Director of the Mendel Art Gallery in Saskatoon, a past member of the Montreal Museum of Fine Arts, and a past Director of the BC American Marketing Association. She is co-founder of the BCAMA’s Mentorship program for marketing professionals. Anne is an avid alpine and nordic skier and a keen supporter of the Arts. She spends most of her time at Big White Ski Resort with her husband Rick. They have two sons living in Vancouver.

Juergen Krieger graduated from Okanagan College in 2013 with a BBA and proceeded to obtain the CPA designation in 2017 while working in various finance and accounting positions towards his current role as Controller.

Since 2018 Juergen also started contracting with CPA as a facilitator to up-and-coming CPA candidates and partakes in the annual marking centres where candidates prepare for the three-day CPA final exam [CFE].

Outside of work, Juergen enjoys participating in and listening to live Chamber, Classical, and Choral music.

Liza Wood has over 20 years experience leading new product development in telecommunications equipment, consumer electronics and video games. Originally from Lake Country, Liza moved back to Kelowna in December 2016 to join Disney Club Penguin as Executive Producer. Her strength is in developing and building scalable, collaborative organizations, while managing growth and change. She recently completed a Master of Data Science at UBCO and is currently Director of Data and Production at Two Hat in Kelowna. Liza has served on the executives for the Queen’s University Alumni Association in Vancouver and Montreal and the Project Management Institute Agile Community of Practice.

Outside of work, Liza has explored a variety of artistic avenues, including acting, improv, culinary arts, interior design and creative writing. She is currently an avid amateur photographer.

After graduating from the Lecoq Theatre School in Paris in 1984, Neil Cadger co-founded Wissel Theatre in Gent, Belgium. Wissel Theatre devised performances and toured Europe and North America for a decade (The Kitchen in New York, the ICA in London, the Shaffy Theatre in Amsterdam). He subsequently performed in Europe with theatre/dance companies such as Co. Mossoux-Bonte (B) and Karine Ponties (Dame de Pic)(B) and in Canada with One Yellow Rabbit Performance Theatre.

He taught in the Drama Department at the U of Saskatchewan for 5 years then moved to Kelowna and started the BFA Interdisciplinary Performance program at UBC Okanagan in 2005.

In 2017, after presenting national and international performances in Kelowna for 6 years Cadger founded the Living Things International Arts Festival.  Living Things is an annual mid-winter performance festival in Kelowna with a focus on ‘animation’.  Through the presentation of hand puppets, shadow play & marionettes, animated films, animated objects & interactive installations, Living Things explores our relationship with the ‘inanimate’ world.

He continues to devise performances with students, colleagues & independent artists.

Roger Bizzotto has been supporting teaching and research at UBC’s Okanagan campus for over 27 years. On-the-job inspiration comes easy when interactions with brilliant and creative minds are a daily occurrence. His services to UBC include involvement in the design and construction of new buildings, and oversight of a great team of Facilities professionals responsible for Operations and Maintenance of campus land, buildings, and Infrastructure. Roger has a background in trades and engineering and as UBC alumni, holds his master’s in management. Roger enjoys the Okanagan living and healthy lifestyle of yoga, cycling, hiking, and kayaking. He also recently tapped into his artistic side by taking up guitar where on many weekends, you will find Roger playing guitar in a garage band of long-time friends.

Melvin Liu is currently a Human Resources Manager for Interior Savings and has been a HR Professional for over 15 years in both the Private and Public sectors.  He completed his BBA from Thompson Rivers University and is a Chartered Professional in Human Resources (CPHR).  He is excited learn more about KVPACS and to contribute, celebrate and promote the Arts.

Melvin and his wife Stephanie have lived in Kelowna for more than 20 years and enjoys the active lifestyle the Okanagan has to offer.  He appreciates the value the Kelowna Cultural District offers to the local community and tourists.  Melvin loves to travel and exploring everything this world has to offer, however he believes that there is no place in the world that compares to the Okanagan, specifically Kelowna.

Allyssa Costerton-Grant joined the KVPAC Board in 2022, and she is a member of the governance committee.

Allyssa’s career has been dedicated to working in higher education, and for the last 10 years she has worked in progressive roles at the University of British Columbia’s Okanagan campus. Throughout her career, she has been fortunate to gain experience across several different Faculties, first as a communications professional, and since 2018, managing strategic initiatives where she was responsible for translating goals and vision to practice.

Allyssa completed her Bachelor of Professional Communications before earning a Masters of Management from the University of British Columbia. She is currently a doctoral student with the Edinburgh Business School, where her research explores community engagement.

Outside of the office, Allyssa is an active member of the community and a longstanding volunteer for several organizations; including, serving as a director for the Kelowna General Hospital Foundation board of directors.

Dave Munroe is the Director of Finance at National Seating & Mobility Canada. NSM is North America's leading provider of complex rehabilitation and home medical equipment. Dave previously held progressive management roles at BCAA and obtained a Chartered Professional Accountant (CPA, CA) designation at PwC, working both in Vancouver and Amsterdam, Netherlands. Dave holds a Bachelor's in Business Administration from Western University (London, ON) and has also attended management programs at the Louvain School of Management (Louvain-la-Neuve, Belgium) and Sauder School of Business (UBC).

An avid musician, Dave currently plays tuba with the Okanagan Symphony Orchestra and Kelowna City Band, having previously played with the British Columbia Regiment Band (Vancouver) and other groups in Canada and The Netherlands. Dave settled in Kelowna in 2021 with his wife and daughter and looks forward to contributing to the arts in the Okanagan Valley as a musician and member of the RCA board

Colleen Fitzpatrick is a public relations practitioner and community engager who has held senior roles in both for-profit and non-profit organizations in the public and private sectors. She was most recently the Director of Convocation/Associate Director Community Relations and Events at the University of Waterloo and managed Community Relations and Events at the Centre for International Governance Innovation, a leading global governance think-tank. Fitzpatrick brings with her a decade of developing and showcasing visual and performing arts, and cultural programming for community engagement and education.

Fitzpatrick earned her Bachelor of Commerce degree from the University of Guelph and a post-graduate diploma in Public Relations from the University of Victoria. She is the former Chair of the Program Advisory Committee for the Public Relations program at Conestoga College, is a former PR Chair for K-W Oktoberfest honoured with the President’s medal for volunteerism and was nominated for Rogers Woman of the Year in 2015 for her passion mentoring youth.