It has been a wild ride since James Mullinger’s Embrace Where You Live Comedy show was originally scheduled in April of 2020, but the good news is that James is coming to Kelowna and this show will be happening on September 30, 2021.

Due to COVID restrictions, we have had to make some changes to the scheduling so that we are following all provincial health orders put in place for the safety of the staff, audience and performers and we thank you for your support and understanding. Train Wreck Comedy and the Rotary Centre of the Arts are doing everything we can to make sure you will be able to enjoy this show in a safe and comfortable environment.

James Mullinger is excited to be back on stage and at no point did he ever want to cancel this tour! We look forward to seeing you on Thursday, September 30, 2021, for a well-earned and much-needed laugh.

The Rotary Centre Box Office will be in touch with current ticket holders shortly, if they have not been already, to explain the changes due to the current PHO. If you don’t have your tickets yet, don’t wait too long as this show will sell out soon.

Thanks again for your patience, support and understanding through these incredibly challenging times.

-------
ABOUT JAMES MULLINGER
On April 28, 2016, Comedian James Mullinger sold out Harbour Station Arena in Saint John, outselling Jerry Seinfeld, Iron Maiden, Def Leppard and Jeff Dunham! The stand up special of the show itself was picked up by Hulu and Amazon Prime so his tales of life in Atlantic Canada are now being enjoyed by people in Germany, Japan and America.
In April 2018 he sold out Harbour Station a second time, this time beating his own record which made headlines across the pond.

James tours extensively to packed houses across Canada and England. A big-budget movie had been made about his early years in stand up (starring actors from Twilight, Downton Abbey and Notting Hill and comedians such as Jimmy Carr, Gilbert Gottfried, Mike Ward and Pete Zedlacher). It was described by NME as the “funniest film of the year,” “unmissable” by GQ Magazine and “essential viewing. A funny, realistic look at what it takes to become a stand-up comedian,” by the Montreal Times. Watch the trailer here.

Comedian James Mullinger is one of Canada’s biggest cheerleaders. He loves it here and spends his time promoting it across the world and raising money for charities and non-profits. James has raised more than $100,000 for Canadian charities. He has also become one of Canada’s top comics, being nominated for both a Just For Laughs comedy award and a Canadian Comedy Award for Best Live Show.

The Rotary Centre for the Arts continues to closely monitor and follow all BC Provincial Health Orders. As announced by the Province of BC on August 23, 2021, we will be asking all patrons entering the Mary Irwin Theatre for proof of vaccination with BC’s approved vaccination passport beginning September 13th. There will be no exceptions. Masks are mandatory in our theatre at all times. Please refer to the Province’s updates for the most recent information. 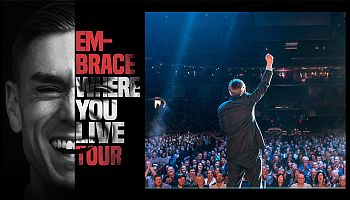