Reflecting on twenty years as Kelowna's arts and culture hub

In November 2002, the RCA officially opened its doors to the public. Ever since, we have worked diligently to create positive impacts in our community by delivering a wide range of arts education programs, producing world-class live audience experiences, and maintaining low-cost community art programs that make quality live entertainment accessible to all. Situated on the former site of the Okanagan Grower's Supply Building, our landmark downtown campus is included on the City of Kelowna's Heritage Register and comprises some 44,000 square feet of performance, exhibition, and studio space. That space has played host to spectacular cultural events and stirring exhibitions that have allowed our community of patrons to connect over a shared love of art, culture, and creativity. As we reflect on this remarkable history, we are looking forward to another two decades as Kelowna's arts and culture hub. Join us as we celebrate and build toward an exciting future.

Our Rotary Centre for the Arts has become a vibrant home away from home where people can come together to celebrate creating and enjoying the arts in the Okanagan.  It wouldn’t be possible without support from people like you.

More than thirty years ago, a visionary group of Okanagan citizens initiated the concept of a new home for visual and performing arts in Kelowna. These people formed the Kelowna Visual and Performing Arts Centre Society (KVPACS) and began collaborating with the City, among others,  to gather support and to initiate a fundraising campaign. The goal was to develop vibrant and dynamic partnerships involving business, local government, and the cultural community to create a major civic facility.

Their vision became a reality in 1993 when the Kelowna City council agreed to a feasibility study to be carried out on the old Growers Supply Building. In 1995, Russell Munn donated $200,000 to have the centre’s 326-seat theatre named after his beloved wife, Mary Irwin, and in 1998, Hotson Bakker Architects of Vancouver were chosen to design the community arts centre.

In 1999, Senator Fitzpatrick announced partial funding for the restoration of Kelowna’s historic Growers Supply Building, which would serve as the home of the new community arts centre. In 2000 with 90% of the fundraising completed, the City of Kelowna approved the construction of the building. In recognition of the Rotary Clubs of Kelowna’s contribution of $350,000, the community arts centre was officially named the Rotary Centre for the Arts.

In 2001, Kelowna’s City Council authorized the commencement of all phases of construction of the community arts centre and on November 2, 2002, the Community Arts Centre officially opened its doors to the public.

We look back at the impact that our Centre has had as a creative hub serving all ages and walks of life. In the past year alone we have seen nearly 200,000 patrons through our doors, have shown art from over 150 local artists, 600 children have attended our art camps, nearly 3,000 youth and adults have taken a class and several thousand patrons have attended a theatre production. Today we have 12 art tenants and a Bistro in our facility that include the Alternator Centre for Contemporary Art, New Vintage Theatre, Artsco (Arts Council for the Central Okanagan), Theatre Kelowna Society, Potters Addict, Brandy Masch Artist, The Piano Room, The Vocal Studio, The Okanagan Music Collective, Ponderosa Fibre Guild, and now the Roma Nord Bistro, each helping our building come alive.

“From local galleries to life-size wall murals, a community full of art is a community full of culture. Research has even shown that cities that emphasize art have more civic and social engagement, better child welfare, and even lower poverty rates.” Says Colleen Fitzpatrick, Executive Director, on why art is an integral part of building community. “Arts can help create social and cultural bonds within communities. Arts-based engagement promotes cooperation, awareness of local issues, and the reduction of social isolation, all of which contributes to a shared sense of community pride and identity. Thus, arts and culture can create opportunities for political expression, community dialogue, shared cultural experiences, and civic work. And during the past few challenging years with much isolation from our friends and family, the arts, and arts hubs such as the Rotary Centre, have been imperative in providing safe, accessible and creative spaces during times of isolation when having a creative outlet can not only be enriching, but healing […] I am truly humbled to lead the RCA into the next decade.” 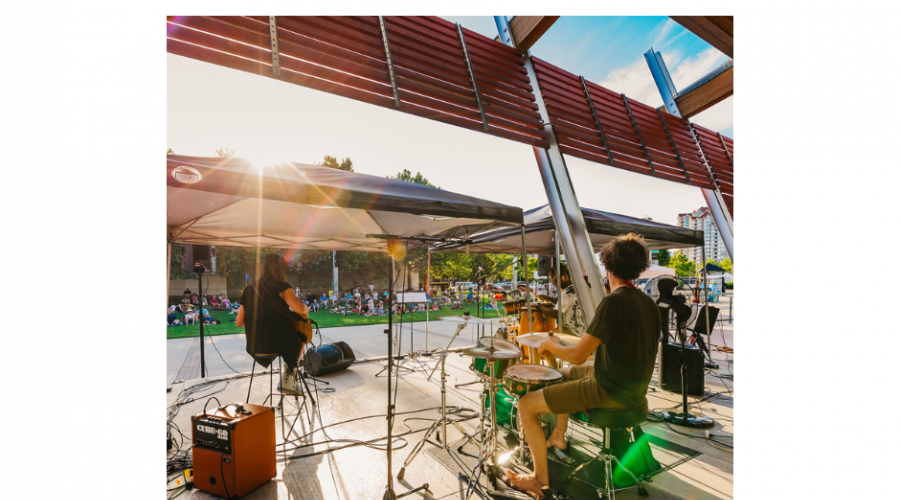 We threw the party of the summer right on our patio. The Summer Patio Concert Series took place every Tuesday evening from July 19th to August 9th. The concept was simple – bring a lawn chair to the RCA and enjoy fantastic free music by professional local musicians. With support from New Country 100.7, the City of Kelowna, the BC Touring Council, the BC Arts Council, Tourism Kelowna, and, of course, our community, these concerts were a huge success. Hosting the event with us were our friends over at New Country 100.7, with Scott Hackman as our talented MC.

Helping us commemorate 20 amazing years of serving the community were our founders, sponsors, funders, donors, past and present Board members, volunteers, patrons, artists, tenants, City of Kelowna, our Cultural District neighbours, and the RCA staff. We are so thankful to everyone who joined us to celebrate.

RCA Presents: Yuk Yuk's - I am Woman Hear Me Laugh

In honour of International Woman's Day, catch some of Canada's funniest comedians in the Mary Irwin Theatre for an unforgettable night of laughs! Yuk Yuk's - I am Woman Hear Me Laugh, with Jane Stanton, Sharon Mahoney, and Amber Harper-Young.

Starring Grammy award-nominated violin virtuoso, Pablo Diemecke, and accompanied by the acclaimed DieMahler String Ensemble, Classical Enchantment will transport you from the classic beauty of London and Berlin to Vienna and Argentina.

An Evening with Martin Kerr blends together an intimate evening of songs and stories with the award-winning Canadian singer songwriter. With his red-hair and crystal-clear tone, he caught the eye of the Canadian Idol judges and viewers in 2008, reaching the top 16 on Canada's most watched show.

RCA Presents is delighted to welcome Séan McCann, the founding member of the multi-million selling band Great Big Sea. Join us as the Shantyman sings the Great Big Songbook. To be in the audience for a Séan McCann performance is a gift to all listeners. Through story, music and the most intimate sharing, Séan opens his heart and connects with each person in a unique way.